I love it when I see my interests spilling over onto my kids.

We broke down and bought my son this costume he really wanted for Halloween. And I must say, it truly was a hilarious choice. It’s a blow-up ensemble that looks like an alien is abducting him from behind. When he runs backwards, grabbing at the walls and counters, it looks like the alien is pulling him away. It’s so flipping funny.

So, I wanted to take a video of him to send to friends and family. I start setting up my phone to record but oh, no – he’s right in there telling me where to stand, which direction to point my phone, and exactly what actions he will be taking. For a split second I was annoyed and then I was beaming! The shot actually mattered to him and he knew what he was talking about!

Dare I say this knowledge was unintentionally bestowed upon him by myself?? Maybe once in a while they actually do pay attention to me when I’m blubbering on about work projects. Regardless, the costume and the video were epic. So was the amount of candy he hauled home and won’t share. 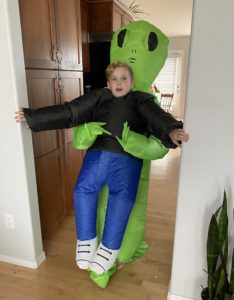